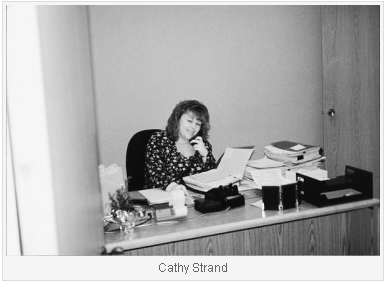 The initial strategy of insurance partner succession was to replace four partners (Massier, Garner, Jones and Marcil) with six new partners: Paul Stanton, Cathy Strand, Stephanie Wellings, Maureen Oliver, Denis Baker and Dirk Moerkens. While this strategy has been changed and refined over time, the firm continues to find opportunities for growth and service.

“Paul has the ability to relate to his clients,” says Larry. “For example, he knows the construction contracting business. He takes the time to visit his rural clients which then gives them the best of both worlds; an urban broker with strong markets and Paul’s personal service .”

By not being reliant upon a few big accounts, today’s partners believe the agency will never be exposed to a dangerous level of concentration. A review of industry statistics by Larry shows that a measure of an agency’s stability is its reliance on its top five accounts. Through constant prospecting for new accounts with the potential to grow, Toole Peet is able to reduce its exposure to risk from concentration.

Cathy Strand, a partner who spent most of her career dealing with insurance companies before entering sales in 1996, succinctly explains how she and the other producers build their portfolios of clients. “We’re not really cold callers, although we do work at that under certain circumstances. Primarily, we rely upon referrals and relationships.”

Strand has a thorough knowledge of insurance operations having been involved in all aspects from personal lines to office management and marketing manager during her career. As well, she spent two years in a major brokerage office in Toronto when her husband was transferred there. Strand thrived at Toole Peet, completing the nine course associateship in 1979 and her chartered Insurance Broker designation in 1982 to become one of the first three women, and the youngest at the time, to reach that goal.

“Cathy always had the spark to be a major producer for us,” Larry Toole notes today. “It was not difficult for her to make the switch to being a producer. She is taking over a book of business built up by former partner Stephanie Wellings. Stephanie was an assistant to Peter Jones and an integral part of the 1980’s succession plan. Stephanie retired early, unfortunately, because of health reasons. Cathy is in the process of assembling a group of clients in the social services industry. In a very short time she has brought the group to the point where it represents the dominant market share.”

Similarly, Dirk Moerkens, a reserved, well-read and athletic young man with a particular affinity for the technicalities of insurance, is adding a portfolio of homebuilders to his accounts through a specialized policy package he has developed. He has joined the homebuilders’ association and now calls regularly on the membership. His specialized policy package, he is sure, is part of a long term trend in the industry in which insurance companies and agencies are developing expertise for a class of risk and then providing specialty insurance products to cover that risk.

Today, Moerkens can provide a homebuilder with a quote within five minutes of obtaining the basic underwriting information.

Larry Toole describes Moerkens’ business approach succinctly: “Dirk epitomizes the professional commercial insurance broker. He learns the client’s business, identifies the risks inherent in that business, sells the necessary coverage and then aggressively obtains the best price for that coverage.”

Moerkens’ introduction to the firm provides an insight into how many of the recent promotions to partnership have taken place. He was initially brought in to support Jim Garner and Jack Massier in 1986 because he had a thorough insurance background in underwriting. In addition, he had received valuable training in sales during a stint with a life insurance company, an education that many agencies are unable to provide. He was given a small desk in the back area and assigned a series of unchallenging jobs, mostly completing the endless paperwork that trailed behind the unstoppable Massier and Garner. He chewed his way through the work diligently until the day he overheard the senior partners worrying over the placement of a difficult risk. He spoke up and volunteered to get the risk placed. The partners gave him the chance, he was successful and from then on he moved forward in the firm rapidly. It wasn’t until several years later that he was told that the firm had been testing him, watching to see if he would take the initiative. In 1992 he was made a partner. Within the firm he is considered to be the most efficient at new business prospecting, a natural skill he enhanced through his life insurance training. 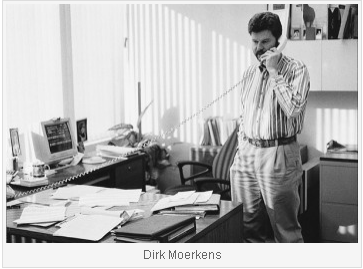 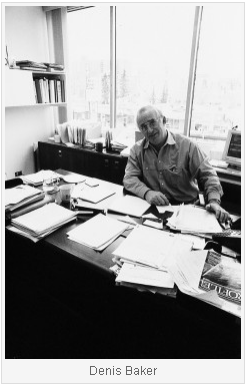 Denis Baker, an engaging Irishman, joined in 1987 with a solid background earned inside the insurance company ranks. Coming to the firm with an established career and the confidence acquired through that valuable experience, he adds a steadying influence to the insurance partnership.

Denis has an ability, which Larry Toole finds very valuable, to handle difficult situations and is imperturbable at times of crisis. “Denis is unflappable. He has the ability to put into perspective what appears to be a negative situation.”

The partnership arrangement at Toole Peet is attractive to Baker because of the sense of teamwork it has created, and because it allows the partners to work at their most effective level. For example, at one time the partners shared the department’s myriad management responsibilities, ranging from staff supervision to mail delivery.

Today, the partners have hired an office manager and, as Baker says, “We focus on what we should be doing; producing new business and servicing our clients.” Typically, the partners spend 80 per cent of their time with existing clients and 20 per cent seeking new clients. Baker sees this as changing gradually over the next few years to the point where more time will be spent seeking new business: “It should be higher,” he acknowledges.

In 1996, for example, the insurance agency lost to a specialty program the Catholic Church account which Sidney Robbins had been instrumental in obtaining. As much as Larry was concerned that the loss in revenue could not be easily replaced, a meeting of the partners immediately confirmed that they were willing to rally quickly to the challenge as they unhesitatingly expressed their commitment to an extra marketing and prospecting effort.

Maureen Oliver, who Larry Toole particularly admires for the effort she made in earning her industry fellowship as she progressed to partnership from personal lines (she was the first), is on leave while battling ill health.

As efficiently as the department runs today, the first years were demanding for Larry, as Paul Stanton remembers. “Larry worked hard … the changes were difficult. The young partners wanted to grow but we all had to get used to each other first. Slowly an understanding of everybody’s strengths and weaknesses evolved.”