The Stewardship of Larry Toole

The Profitable Sale of the 2nd Street Office 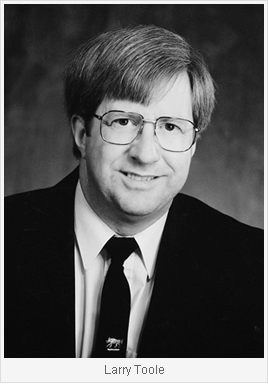 In business, as in all of life, transitions are never easy. In 1979, when Larry Toole joined Toole Peet as the firm’s controller, the business was on the edge of inevitable change. The firm’s partners were all of the same generation and approaching the age of retirement as a group. As the successor to his father’s ownership of Toole Peet, Larry Toole recognized that it was up to him to prepare the firm for a renewal of its management if he wanted to take over control of an ongoing business. The alternative, and one which was openly discussed, was the sale of the firm.

How this transition was carried out, and why it was a success, is a reflection on the firm’s remarkable ability to adapt and allow new management styles to replace retiring ones. Just as Barney Toole and George Peet, as forceful as they were in character, allowed Archer Toole to run the firm in his own way; and just as Archer passed the reins to Bill Toole; so Bill allowed Larry to develop a leadership style of his own. This acceptance of change, and the ability to select the right people to carry it out, has proven to be just as essential to Toole Peet’s longevity as the fundamental principles of honesty and reliability that Barney Toole and George Peet insisted upon in the beginning. To understand how Larry Toole was able to continue the firm’s growth after he assumed the presidency in 1988, it is crucial to recognize how diligently he worked at learning the intricacies of the business and its potential.

Being of a very pragmatic nature, Larry joined the firm well educated, experienced in business and with a clear understanding of the task facing him. As the eldest of the four children in the Toole family, he had always been aware that Toole Peet was an option available to him but, like his father, he was reluctant to take an early advantage of the situation and chose to begin his career where he would have to survive on his own merits. He completed his commerce degree at Queen’s University in Kingston, Ontario, and returned to Calgary where he articled with Peat Marwick, earning his chartered accountant’s designation in 1977 and, incidentally, worked with Llew Valentine’s son, Peter, now Alberta’s Auditor General. Peat Marwick’s accounting offices were across the street from Toole Peet’s offices on Second Street West and periodically Larry and his father would get together for coffee or lunch. Besides being able to keep abreast of the firm’s news, during his tenure with Peat Marwick he was able to take advantage of opportunities to be in the forefront of contemporary business techniques, particularly the quickly evolving field of computer automation, which Peat Marwick had entered.

At the age of 26 he became Toole Peet’s controller and received his introduction to the business as he supervised the move from Second Street to Seventeenth Avenue. More importantly, he learned firsthand how the business operated as he instituted new accounting procedures over the next few years, including the computerization of the insurance agency accounts.

The Profitable Sale of the 2nd Street Office