The Profitable sale of the 2nd Street Office 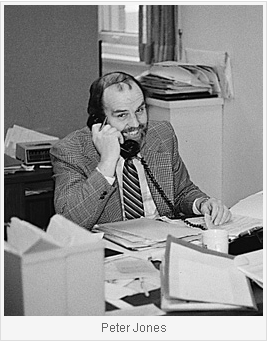 Peter Jones, who retired as a director in 1993 after almost thirty years with Toole Peet, was a beneficiary of the boom years and a willing contributor to the efforts made by all the directors to see the firm through the recession of the 1980’s.

A native of Liverpool, he joined the firm in 1964 after working for the Union Of Canton in Calgary as an underwriter. A corporate merger gave him the opportunity to take an unscheduled traveling holiday with the guarantee of a job with Toole Peet upon his return.

Three months later, in December, he was back in Calgary, his savings entirely spent. Toole Peet agreed to put him to work immediately and gave him a $15 Christmas bonus, just so he wouldn’t feel left out when everybody else got something more substantial. It was a symbolic gesture that he never forgot.

Jones became a partner in the insurance department in 1976 in recognition of his contribution to sales and management as well as his many involvements within the industry. He was a member of the Insurance Brokers Association and an officer of the Insurance Institute of Southern Alberta from 1967 to 1975, including a term in 1974 as president. Jones was also the President of the Society of Fellows for 1987/88 and the national representative for a further four years.

“I was a strong proponent of continuing professional education and hired staff only if they promised to commence Insurance Institute courses. I was a lecturer in property insurance at Mount Royal College for the first two years of its insurance program. Many of the ‘next’ generation partners were hired by me.”

Besides his business interests, Jones was active in the community serving on the board of Theatre Calgary for three years and was Commodore of the Glenmore Sailing Club in 1974.

He brought to Toole Peet many oil and gas clients, marine and overseas risk-related clients and managed the Roman Catholic Church account for over 20 years. He also took a leadership role in company relations and agency management.

“It was a fabulous place to work,” he says. “Bill gave the insurance department tremendous latitude and when I became a partner we always managed to strike a fair balance on sharing the profits.”

There was a strong family atmosphere to the office and, as Jones remembers well, the staff were all proud to be part of a family business. Competitors who saw other partnership agencies falling apart as arguments and bickering arose often queried him.

“Bill was fair,” Jones notes today. “If somebody was in a bad personal situation, then we would all overlook a helluva lot in the office to help that person through.”

The positive atmosphere that was created in the office during the boom times paid off in the recession of the 1980’s when, as Jones puts it, “We had to take decisive action. Because we saw the firm as a ‘family’ when money became tight, salary maintenance and increases took precedence over partners’ shares. We had a very loyal and hard-working staff.”

The Profitable sale of the 2nd Street Office