The Lancaster building will be completed!

As the principals of the firm, senior and junior, began to recognize the value and longevity of their business in the profitable years of the late twenties, more thought was given to the arrangement by which the junior members held their shares. Not unexpectedly, the old agreements, dating back to before the war, seemed inappropriate as the junior members felt they had no real security or assurance that they would participate beyond their salary. The senior members felt their ownership and control threatened. While everyone had an opinion and a suggestion, only Barney Toole was willing to speak his mind openly on the topic. He tackled George Peet first and, in a very candid letter, put forward the view that the two of them had to agree on a solution and then, united, deal with the junior partners.

Just before the Crash. Just days before the stock market crash of 1929, George Peet paid for an investment with this cheque to James Richardson and Sons. There is no record of the outcome of the investment. After outlining the possible solutions to the share distribution problem…

Barney Toole closed his letter to George Peet with:

Will you please peruse this carefully, and if you will take my advice you will write me a memorandum, making up your mind on the general principle before you consult with any of the others, as you and I have to be agreed first; hence my effort to put our united position, and my own personal position, clearly before you, so that you must see that the others must fall in with our ideas or resign, and if they resign there is no opposition; but because we happen to enjoy that position is no reason why we should try to do anything that is not in the best interest of all. Remember that we started this business as a partnership, on a certain percentage of profit understanding, and when we turned it into a Joint Stock Company we did so in order that the junior partners would derive and be entitled to a legal proportion of the dividends, but we never did anything, or intended any action to remove from us the full control and ownership of Toole, Peet & Co. Ltd.

Under Barney Toole and George Peet’s leadership, the situation was resolved amicably. The two senior partners retained control of the company and the junior partners were assured that hard work would be rewarded. Basically, the shareholdings were restructured to create management shares in addition to shares, which participated in any dividends payable at year end. The firm continued to pay bonuses whenever appropriate.

Barney Toole’s boarding house roommate from Calgary’s first railway days, R.B. Bennett, became Prime Minister in 1930 and continued to visit whenever he was in town. The firm was active in the stock and bond business, owning a seat on the Calgary Stock Exchange, of which Barney was a founding member. A mortgage, a second story and a boiler were added to the office building. This expansion was probably premature as the depression of the thirties was not far away but, because the twenties had ended well, the firm proceeded with its plans. The population had grown from 64,000 in 1921 to over 80,000 by the end of the decade. The retail shops were busy, giving the partners confidence in the continued prosperity of the downtown area. The coal business began to wane due to rising prices, freight charges, and growing competition from natural gas. But the oil industry began to show renewed potential.

When Imperial Oil took over the Calgary Petroleum Products Company and built a 4000- barrel a day refinery in Calgary in 1922, the oil industry could feel the return to the excitement of the 1914 hiatus that was marked by a stock market frenzy. In 1924, Royalite, Imperial’s subsidiary, drilled a new discovery well at Turner Valley and started another boom bringing in new capital, technology and workers, of which about one third were American. Many of the arriving American capitalists were introduced to Calgary by the Tooles and George Peet and taken around the clubs and social circles associated with the business community.

The oil stock market hit the headlines and the trading desk at Toole Peet drew a crowd of excited investors who anxiously waited by the ticker tape to get the latest prices and results. Developments at Turner Valley had increased crude production to the point where, by 1930, 92 per cent of Canadian crude was supplied by Turner Valley. The boom settled down, however, as production reached a steady level and the speculators drifted away. For the city, the Turner Valley discoveries were to prove of lasting value after the war. When the Leduc discovery brought fresh investment to the province, Calgary already had an established and experienced industry infrastructure which assured the city that the money would find its home in Calgary, rather than Edmonton. 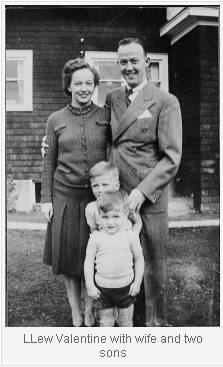 Llew Valentine, an ambitious and clever young man, joined the firm just before the depression took hold. There was no shortage of jobs at the time and he’d been moving his way up the ladder in the financial community by taking openings that would advance his progress quickly. He’d had experience in banking and securities when he joined Toole Peet’s insurance department to work under the supervision of Sidney Robbins.

He had some experience with the firm several years before when he had worked as George Peet’s assistant in the coal operations and so quickly adjusted to the temperament of the office. At the time, the firm wrote bimonthly pay cheques for the 23 employees and partners on the payroll and advertised itself as “Financial Agents”. The firm was highly organized with seven operating departments and several sub-departments.

While the organization of the firm made a fine presentation to the customers, it was the special attitude of the two senior partners that made the business last through the difficult years of the depression. Llew still remembers the atmosphere in the office:

We were all salesmen and there were no specialists. We all did what we could to build up the business.

The Lancaster building will be completed!