Toole Peet Moves Against the Tide

The collapse of 1913 sent most of the city into shock as banks began the inevitable round of foreclosures. Toole Peet moved against the tide by taking on new offices, more partners, and a stronger alliance with the Canada Life Assurance Company. 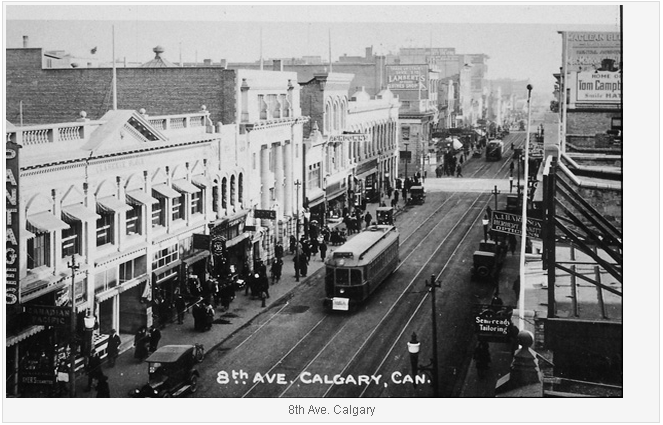 Henry Jones, King Graburn, and Archer Toole all joined the firm as lesser partners in 1913, a change that was accomplished by transforming the original partnership of Toole, Peet & Co. into a limited company, Toole, Peet & Co. Limited. The addition of the new partners, George Peet reported later, was to allow them to participate beyond a salary in the company’s profits.

Barney Toole took over as loan manager for Canada Life and for Imperial Life, a position that required he have a separate office in Canada Life’s new building at 301 8th Avenue. From this office it only took him a few moments to visit Toole Peet’s offices on the ground floor where they faced Second Street. He did this often.

A writer describing the businesses of Western Canada in 1914 (The Prairie Provinces of Canada, by H.J. Boam, 1914) described the operations of Toole, Peet & Co. Limited as:

“The business is divided into four departments – loan, real estate, insurance and coal – each department being under the management of a thoroughly experienced man, the two partners exercising a general supervision. In the realty business the firm specializes in what is generally termed “inside property”, i.e., property within or adjacent to the city limits. Such are the Calgary suburbs owned by the Canadian Pacific Railway, Mount Royal, South Mount Royal, Bridgeland, and Sunalta – for which the firm are the exclusive agents – while they are also the exclusive agents for the subdivision known as St. George’s Heights, situated within the 1 1/2 miles circle of the post office.

“Mr. Toole is, in addition, the loan manager for Southern Alberta for the Investment Departments of the Canada Life and the Imperial Life Insurance Companies. He is also a member of the local board of the Edinburgh Life Assurance Company. A large investment business is done on behalf of clients in Great Britain and Eastern Canada, for whom hundreds of thousands of dollars have been invested in first mortgage securities.

Today’s residents of the Calgary suburb of Mount Royal certainly owe Barney Toole much for the preservation of the area as a residential district. In 1911, in his capacity as agent for the CPR which owned the lands as part of the grant which brought the railway to the west, he put on a caveat which restricted the district’s lots to residential use. Otherwise, it is very likely that Mount Royal residents today would find their quiet, family atmosphere broken up by numerous convenience stores, gas stations and commercial sites.

It was Barney Toole’s intent to ensure the district became an estate district; this caveat, as shown by the attractiveness that the district has maintained since 1911, has proven to be more effective in controlling development than any by-law or city planning ordinance. Barney Toole’s caveat remains on many of the lots in Mount Royal today. His nephew, Bill Toole, still receives inquiries about the caveat 80 years after it was put in place.