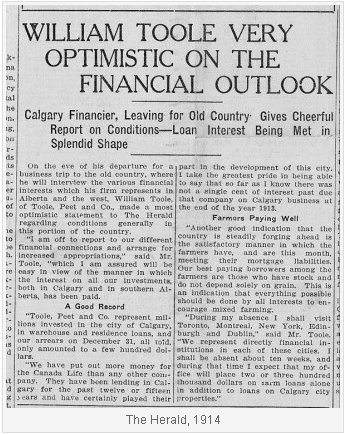 Curiously, Mount Royal was locally known as American Hill during the real estate boom of 1912 when many Americans moved in to join the land speculation. It is believed that the French Canadian street names were selected to counteract the American influence.

Although the city itself must have felt itself much like a small sapling thrashing in the ever-changing winds of fortune, the firm of Toole, Peet & Co. Limited enjoyed stable growth under the direction of its two leaders, each working in his own way to develop opportunities.

The firm acquired the agency for Lloyd’s of London and proudly hung the Certificate of Authority in a prominent spot. The certificate still hangs in the firm’s offices. The office had a neat, spotless atmosphere that confirmed in the minds of the firm’s clients that it was here, where the desks were lined in neat, precise rows behind a long counter, that business could be transacted in a neat, precise manner.

Barney Toole probably surprised his friends in Calgary in 1914 when, on a trip to Ireland, he married Alice Nunn, who lived near the Toole estate. It was a marriage which proceeded quietly and, probably because his first marriage ended so tragically, Barney Toole kept this event quite private. It was noted that his wife was a good tennis player. They had one daughter, Barbara, born in 1916, who married Eric Connelly, a Calgary accountant and businessman, in 1948. They had one son, Brian, born in 1950.

Meanwhile, the three younger Toole brothers, Archer, Jack, and Ned, were settling into their new life in the Canadian West and gaining attention. Each possessed the special Toole ability to be an athlete, a forward-looking citizen and a resolute friend. Archer, in particular, must have been particularly apt in finding his way in Calgary’s society for, just as World War I was breaking out, he won the heart of Phoebe Sanders and married her days before he was shipped overseas.

Phoebe Sanders was a prize; but one for which only a few of Calgary’s bachelor’s dared to vie. She was the whirlwind daughter of Colonel Gilbert Sanders, C.M.G., D.S.O., the former commandant of the NWMP detachment and, from 1908 to 1932, city magistrate. Colonel Sanders thoroughly enjoyed the rugged life of the west and, whenever he traveled, he would let his determined daughter accompany him if safety permitted. The two thought nothing of traveling several days at a time by horseback to remote courtrooms or of hiring Indians to paddle them up and down the rivers. Quite beautiful, Phoebe had a bright spark of fun in her and once incurred the wrath of her family and friends for putting on an impromptu wild west show for the tourists at the Banff railway station. She played tennis, golfed, and danced with enthusiasm.

Archer, on the other hand, had a more reserved nature that belied an equally strong personality. Considering that he had the use of only his left eye, he had always been a first-rate soccer player and all-around athlete like his brothers. But his most noted trait was his ability to maintain the peace when dealing with forceful personalities such as George Peet and Barney Toole who were used to dominating situations. As Archer would later prove, it was this ability that kept the partnership together and enabled him many years later to take control as the elder partners reluctantly moved into retirement. Likely, it was this personality trait that tempered Phoebe’s enthusiasm and the relationship proved a success. 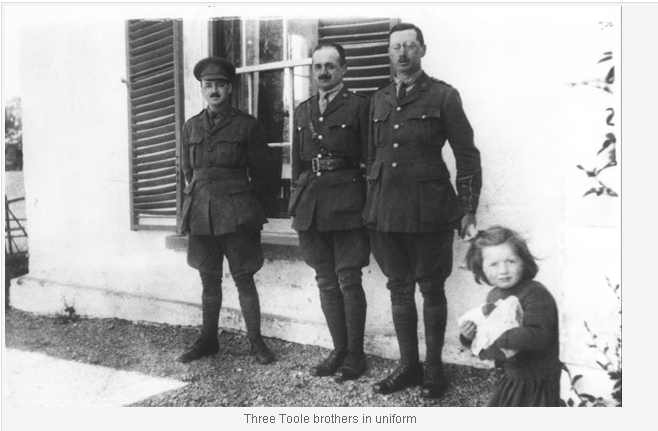 With war breaking out, the courtship quickly progressed to a marriage which took place May 26, 1915. Several days later Archer was on his way overseas to join the fighting. By the end of the war, four Tooles (Archer, Ned, Jack and George) had served. Only Archer and George survived. 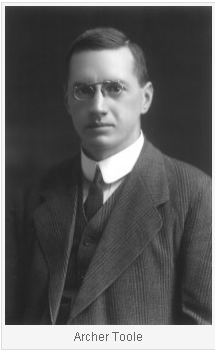 Just as the war had interrupted Archer and Phoebe’s courtship, it interrupted the expansion of Toole Peet. Optimism in the city flickered briefly when oil and gas flared at Turner Valley but, as capital was diverted to the war effort, the brief speculation in oil shares brought little lasting wealth to the city.

However, it did bring the city more notoriety as stock dealers and promoters quickly set up shop and raked in money as fast as investors could hand it over. Until the war ended, the citizens of Calgary and the partners of Toole Peet were resigned to knowing that prosperity would not be coming through their office doors until peace returned. It was a time to keep one’s spirits up, send what one could to the front, and maintain order and routine until the War’s end brought renewed opportunity.