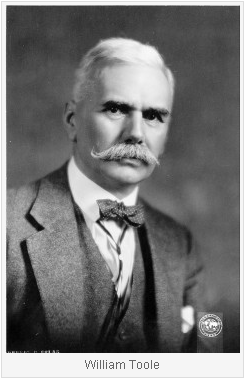 1905 must have been a tumultuous year for Barney Toole and George Peet. After eight years of working single-handedly, George Peet now had a partner. He could no longer come and go as he pleased and make whatever business arrangements he felt were best. Instead, he had a most unusual partner who, after toiling for more than a decade in the bureaucracy of the CPR, was well-trained in the importance of tight scheduling, punctuality, orderliness and careful planning.

George Peet’s transition from sole proprietor to partner was probably smoothed by the firm’s move to new offices in the Herald Block on Seventh Avenue and Centre Street. There, in the heart of the small city’s business district, the two businessmen were able to put their individual talents and resources to work in a buoyant atmosphere.

Alberta becomes a Province in 1905

Indeed, it was a buoyant time in Calgary in 1905 and the signs of progress were everywhere. The Province of Alberta was formed from the old Northwest Territories signaling, in a symbolic way, farewell to the grand days of the expansive ranches which were being replaced by homesteads and farms. The successful ranchers, however, had not bid farewell to Calgary and men like A.E.Cross, George Lane and Archie McLean were putting their organizational abilities and money to work in new enterprises ranging from brewing to politics.

Calgary had sprouted from a tent town in 1883 beside the just-built railway tracks. In 1894 it had a population of almost 4000. In 1905, its 12,500 inhabitants lived in modern conditions. Although Edmonton had been selected – after much rancorous debate – as the provincial capital, Calgary was the acknowledged commercial capital. It was the chief wholesale and distributing point between Winnipeg and Vancouver. Most major enterprises were represented in the city where they could take advantage of the railway lines which branched north to Edmonton and south to Fort Macleod. Attendance at Calgary’s public schools had doubled in two years, from 676 students to over 1200. There were churches of all denominations, two large hospitals, and a sanatorium for the treatment of consumption (tuberculosis).