From Clerk To CPR Land Agent 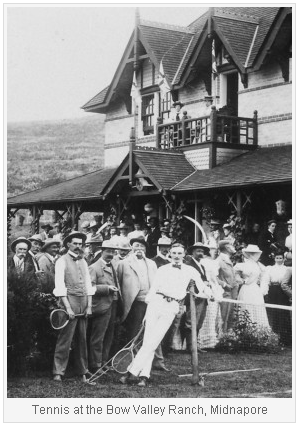 In 1894 Barney Toole stepped off the railway platform at Calgary and into a community that tested everybody’s muscle and wit. He is an easily imaginable figure standing on the platform, his dark eyes confidently measuring the scene and its inhabitants against his own above-average abilities. He stood six foot two, weighed two hundred pounds and was a top-level athlete. His will was as hard and determined as the CPR rails which brought him to Calgary and his mind was as precise and as focused as the surveys of the surrounding land which he was soon to control for the railway. Barney Toole was a formidable man, physically and mentally, and by the time he had arrived in Calgary at the age of 23, experience had already shown him that setbacks were not going to deter him. Anybody that assumed Barney Toole was just another tough Irishman looking to make his fortune would be very mistaken.

William (1871-1952), as he was known in Ireland, was the eldest of 13 children raised in Curracloe, Wexford County, Ireland. His father was a successful civil engineer, surveyor and landowner with business and family connections from London to Winnipeg. William, it can be assumed, would have been expected to follow the logical succession of prosperous Tooles who could trace their ancestry back centuries. But a freak storm changed the Toole family destiny forever. When William was 18, a reclamation project to turn a seashore property into farmland was undertaken by his father. An unusually terrible storm destroyed the project before it could be completed. Close to bankruptcy, William’s father terminated his son’s education at a prestigious Dublin school, Trinity College, and sent him to Canada where he was given the opportunity to get a start in life through a family connection, Captain Graburn, of Winnipeg.

A few months of searching for permanent work resulted in little headway although William did manage to establish his athletic credentials on the rugby pitch and tennis courts, winning several Manitoba and the Northwest Territories Championships.

Finally, after a succession of odd jobs including surveying, he obtained a fulltime position in 1890 as a clerk with the CPR at $1.00 per day. It was a very humble beginning for a young man who, a few short years earlier, had aspired to launch his career from a much higher point. But this job was reality. He gritted his teeth, determined to make the best of it. He earned his first promotion when a senior official needed a secretary and William was appointed to the position because he had learned shorthand.

From Clerk To CPR Land Agent